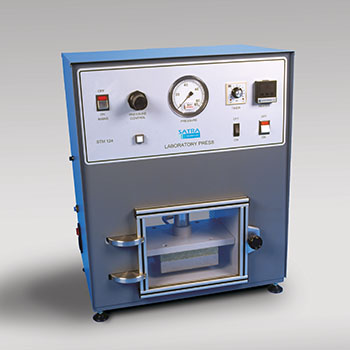 The laboratory press was developed to aid the preparation of standard test pieces for adhesive testing, for example when using peel tests in conjunction with the SATRA tensile tester STM 566.

STM 124 is a vertical press operated by a pneumatic cylinder and develops thrust to approximately 1120kgf (2500lbs). A pressure regulator fitted to the press enables the thrust to be varied as required and a gauge indicates the operating pressure. Also incorporated into the control of this press is a cycle timer allowing the dwell time to be set. The moving platen is fitted with a thermostatically controlled heating element, and to comply with relevant safety requirements the machine is fitted with an interlock switch restricting access to any moving parts.

This press can also be used to cut out small specimens/samples used for tests – suitable knives are available from SATRA.