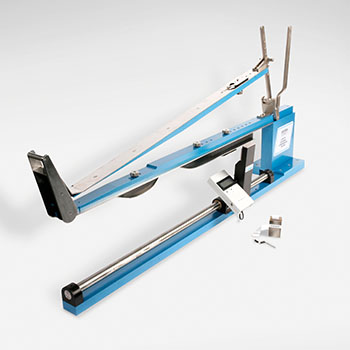 Compression hosiery is commonly used to offset the effects of varicose veins, but also has other medical applications, such as helping to reduce the potential for artery blockages caused by blood clotting (embolisms) during operations. This form of hosiery is also becoming popular for people to wear as a preventative measure against deep vein thrombosis (DVT) on long-haul flights.

SATRA STM 579 has been developed to be used in place of the HATRA Hose Tester MkII which is no longer available.

The device consists of two main parts – a garment former and a measuring head. The hose is loaded onto the adjustable former, simulating the wearing of the garment on a human leg. The measuring head is pressed against the stretched fabric at various points along the length of the leg and displays a value for circumferential tension in the fabric, The results are converted to give a value for pressure.