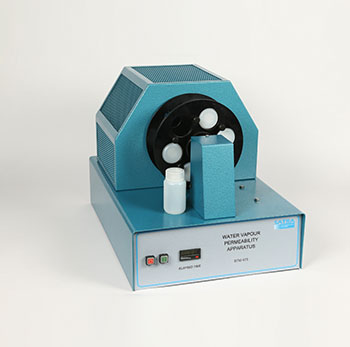 This device determines the amount of water vapour a material will transmit through its structure in a specified time. The test is mainly applicable to leathers and textiles used in footwear uppers and clothing where it gives a measure of the ability to remove perspiration from the surface of the wearer's skin.

The SATRA machine has six separate test stations on a rotary table and each one has a sample holder. Silica gel desiccant is placed in the holder and the test material is placed over the neck of the holder and secured by a screw top. After weighing each holder, complete with silica gel and sample material, the holders are placed and locked into the rotary mechanism.

After 7-8 hours the complete holder is weighed again and the gain is used to determine the degree of permeability. It is essential that the entire operation is carried out in a conditioned atmosphere.

In addition to the standard equipment supplied with the STM 473, there is a built-in timer to record the number of hours that testing has been carried out.