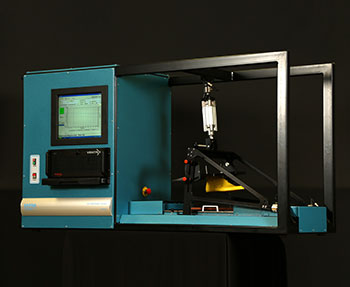 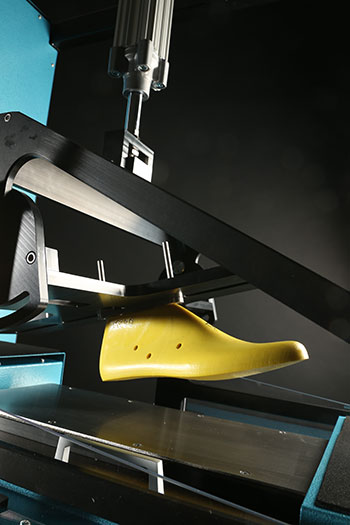 The SATRA slip resistance tester has been developed following extensive biomechanical studies and is representative of conditions encountered during walking when slip is most likely to occur.

A normal walking step commences with heel strike and ends as the toe is lifted from the ground. Slip is most likely to occur shortly after heel strike and just before toe lift when half body weight is being applied. The SATRA equipment measures the slip resistance between the sole of the shoe/boot and the floor.

The machine incorporates a specially-designed control and data acquisition system which provides the user with the coefficient of friction for each test sample. This is achieved by close control of the forces involved including the speed of motion provided by a variable speed motor. The controls provided and the unique design of the circuitry ensure the appropriate forces and speed of motion are maintained through the duration of the test.

A new addition to the software in 2004 allows the user to average the reported CoF over a time period by having dual slides for setting the start and end time of period.

The control console houses a computer which manages the data acquisition as well as providing graphical representation of the test data and provides the coefficient of friction for each sample tested.

The software, which is included with each machine, has principal pre-set tests (SATRA TM144 and EN 13287) which can be accessed through the appropriate window. Users can also introduce their own test standards which can be stored and used again for later tests, ensuring exact repeatability of test conditions.

The determination of friction or slip resistance is a complex procedure and requires the careful and accurate monitoring of a number of different parameters in a relatively short time. The requirements of the various test standards place great importance on the timing and the way results are obtained during a test. The determination of the coefficient of friction requires accurate control.

The dedicated SATRA software for the slip tester is unique. Not only does it control the machine and manipulate data gathered during the test but ensures the accurate control of the entire procedure strictly in accordance with the parameters required by the test standard.

Essential for quality control, data relative to the new job has to be entered before testing can proceed. The operator’s name, test standard, test surface and all other relative data are entered in the relative boxes. If any are not completed the user is prompted to input data. Several boxes have drop down options for ease of use, making the task simple to input the appropriate data. The test standard box is particularly useful as the correct test can be selected from a predetermined list, including a user-defined test. Once selection has been made, the complete machine is pre-set to the required speeds, delays, and point (snapshot) at which the coefficient of friction is calculated. In the case of a user defined test selection, the chosen settings can subsequently be saved and recalled at a later date for repeat testing.

Appearing after the test is a multiple graph showing the various components. There are four lines displayed on the graph, representing vertical load, speed of table movement, horizontal load, and coefficient of friction. These lines are easy to see and are captioned on screen for additional clarity.