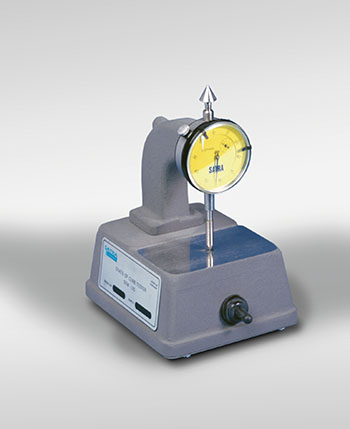 This device is used for measuring variations in the degree of cure in moulded-on rubber soles throughout their thickness.

The test procedure is based on the fact that hardness varies in most rubbers, according to the state of vulcanisation.

The resistance to indentation, which is determined by the hardness of the rubber, is measured at several positions through the thickness of a sample taken from a defined positioned in the sole or heel. The sample rests on a vibrating plate and an indentor is lowered onto it. After 10 seconds, the dial gauge is set to zero and the indentor is loaded. After a further 15 seconds the depth on indentation is read from the dial gauge.

The readings of indentation depth are plotted against their position, relative to the inner and outer surfaces of the sole, and a curve indicating the cure of the sole is drawn. From this graph the amount of ?undercure' near the inner surface of the sole can be calculated. The equipment consists of a dial gauge fitted with a 60° conical end to the plunger and a removable 500g weight, all mounted on an electrically-vibrated base plate.